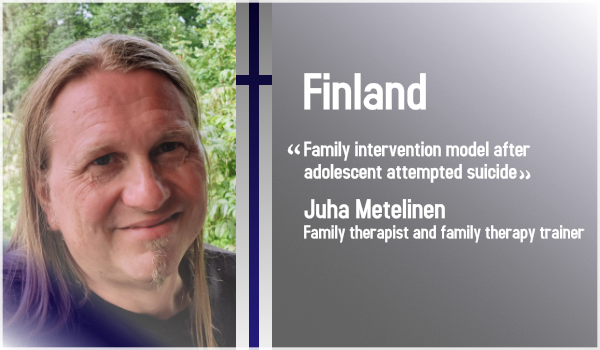 Suicide rates in Finland and in Europe have been decreasing over the years, but suicide attempts and self-harming are still very common. In Finland, self-harming is a very common symptom with adolescents in psychiatric services. When an adolescent attempts suicide, it is a crisis for all the family members. Too often parents have experienced that they do not get enough help and are left alone with this awful crisis. They often feel that they do not know what to do and how to handle the situation.

Mieli Finnish Mental Health is a mental health association, nowadays funded by the Finnish government. In 2013, the organization started a project “Attempted suicide short intervention program (ASSIP)” (translated in Finnish LINITY) for clients who have attempt suicide. The intervention model was developed by Konrad Mitchel and Anja Gysin-Maillart in the University Hospital of Bern, Switzerland. The idea of ASSIP is to prevent suicide attempts. We know that a previous suicide attempt is the key risk factor for suicide. In 2018, the project changed to a permanent service and we named our service the Suicide Prevention Center. It operates in Helsinki and Kuopio.

A few years ago in our Suicide Prevention Center, especially in Kuopio, there was a wave of adolescents coming to the ASSIP intervention. We soon realized that we needed a service for parents and the adolescents to talk together about the suicide crisis, as we call the crisis after the suicide attempt. At that time the family intervention was designed with the co-operation of the Adolescent Psychiatry Clinic in Kuopio University Hospital. We started working together with “the experiment” in the beginning of this year 2022 in Kuopio.

In this presentation the ASSIP model and the model for the family intervention “experiment” will be introduced with the underpinning philosophy. The family intervention model is developed from the ASSIP model and using Attachment Family Therapy Theory. The key factors are working with high risk, safety, and attachments. I believe that the parents and family are a very important safety net for the youth. Our task as professionals and family therapists is to help parents and families with that